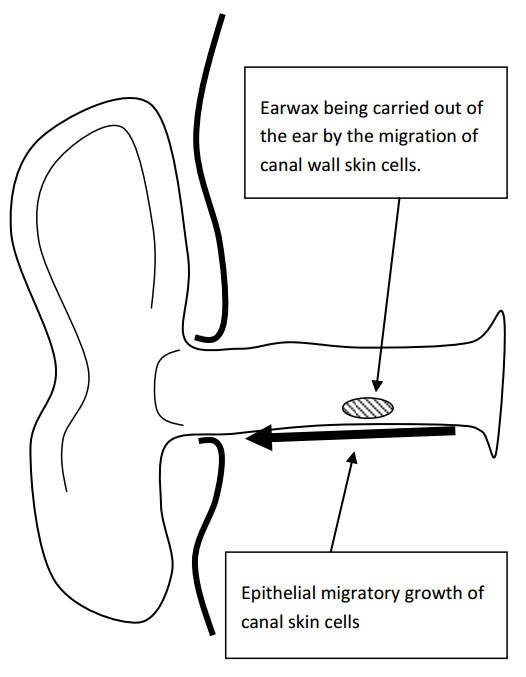 Ear wax is a substance that the ear produces to prevent against infections. The ear wax is slightly acidic which like stomach acid kills bacteria and other organisms. Ear wax is constantly being produced by the ear canal, and specialised cells on the surface of the ear canal transports this ear wax microscopically outside the ear.

This system works extremely well in most people, however some people have trouble with the transport system of cells in their ear canals and the wax therefore is not transported out. If the transport system is not working the ear wax builds up and makes it harder for the cells to drag the larger mass of ear wax out of the ear.

Infections of the ear canal (also known as swimmer's ear or Otitis Externa), stop these migratory cells from removing wax from the ear. It is important that the ear wax does not build up as it will itself become a source of infection.

Using cotton bud or hair pins scratches these cells off and therefore disrupts these migratory cells as well. Cotton buds actually worsen the problem of ear wax, but many people still try and use them. Many people use cotton buds to actually scratch the ear canal. This is happening because when the cells start growing back after being scrapped off, it itches intensely in the ear canal. This is similar to the itchiness one experiences with a scab on the elbow or knee.

It is therefore extremely important NOT to scratch your ear canals. It makes the itchiness and ear wax worse.

To remove ear wax is extremely easy, but to remove it without causing harm requires care and a delicate approach. Mr Vik Veer teaches nurses and other doctors how to remove ear wax correctly and has developed courses to learn this technique properly. He uses a microsuction technique to carefully remove ear wax without damaging the ear drum or canal.

To avoid ear wax from building up again and causing problems requires more experience and repeated microsuction itself is normally not enough. Mr Vik Veer will be able to explain the treatments available to stop ear wax from becoming a lifelong problem. The vast majority of patients can be treated without surgery.